News and stories from our
team of great people 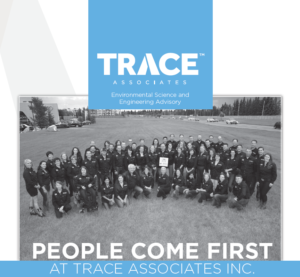 Trace was recently featured in the Business in Calgary and Edmonton October issues to celebrate our 15th anniversary.

“When Darrell Haight and Rhonda Smith founded their environmental consulting firm in 2006, they wanted a meaningful name that reflected not only what they do but also who they are. They landed on “Trace” for its scientific definitions paired with their responsibility to trace the history of the land to understand contamination. The rest of the name speaks to who the company is. Rather than limiting the future scope of the firm by calling themselves Trace Environmental, Haight and Smith instead wanted it to be all about the people. Trace Associates Inc.’s (Trace) focus on people has been a major factor in its success and growth over the past 15 years.”

To read the rest of the article, join us over here to learn more about how we arrived at our 15th anniversary!